I saw reports of snow in certain locations. I am going to tell you that we (Cliff and Shela at OwyheeStar) are in no way ready for winter woes just yet. I ran across this photo in the archives, and it spoke volumes. A few weeks we will be talking Thanksgiving and then maybe snow along with expecting Christmas’s arrival.

It’s coming all too quickly. So, I think the only thing to do is to plan snowballs. That is a bit like laughing in Mr. Winter’s face, don’t you agree.

In the meantime, we can think pumpkin and the spooky nonsense of Halloween. Some of you may not celebrate the event. Others might say it is your favorite holiday. Then we will see your Weimar wearing their costume.

Loki and I have spent much of the last few months frolicking in the snow. We’re training for avalanche rescue which means at this point that we’re spending as much time as we can on the mountain. Loki loves schmoozing the skiers and boarders around the main lodge, and yesterday he had his first ride on my shoulders while I skied.

This weekend we’ll be riding the chairlift. It’s hard to say what Loki’s favorite thing is about the ski hill, but riding down in a gondola filled with ski patrollers has got to be near the top of the list. As we say on the hill, he’s a real little powderhound.

When we’re not on the mountain, I’m working on developing his toy drive with short little breaks of fun, fun play throughout the day. We’ve also started some simple tracking drills and hide-and-go-seek games.

All the best, ~Erica

We are thrilled to hear the news of Loki’s progress as well as to find out he loves snow. It is interesting to get a peek into your world. Thank you, for taking the time to share with our readers and us.

Tags: SAR, Search and Rescue, Snow and the Weimaraner, Weims in the snow

Hi guys! Toby here!
I’m sorry it’s been a long time since I checked in, but I’ve been having so much fun, I lost track of the time!

Lucy and I get to go play in the snow most days. We love it when we can run to our heart’s content!

Don’t worry about my big ears, they never get in my way when I’m having fun!
Did you know we can smell deer tracks through the snow!!!

I get to hang out in the shop sometimes…if I’m a good boy and don’t chew on the “good wood”…whatever that means, it’s all good to me! Max just hangs out. He’s boring.

You don’t have to worry, I always have someone to snuggle with. Lucy takes good care of me. She loves to lick my ears and belly!
I’m up to 38lbs now. Mom says that means I’m a big boy!!
Not as big as Max, though. He used to be 85lb but since he’s boring now, he’s only 79lb. He still loves the snow though!
We had a great Christmas! Santa brought us toys and treats for being good pups!

Santa doesn’t know about some of the mischievous things we do, so don’t tell him!

There are lots of deer here. Lucy loves to chase them but I’d rather stay close to mom. We watch them out the window a lot.

And when we go on hikes, Lucy finds their trails and brings home good things to chew on!

I’m very easy going. I love my tummy to be rubbed or licked by Lucy. She’s always “mothering” me.
We hope you guys are well and will have good litters of pups this year.
Until next time…Love,
Toby (and Lucy, Max, Jeff , and Melissa)

Gracie made this game up as is the way with Weims. She buries the ball under the snow and then surprises herself when she digs it out – every time! She lets me throw the ball every so often so I don’t get bored. Out in the snow with Gracie and our best to you.

Snow Place I’d Rather Be 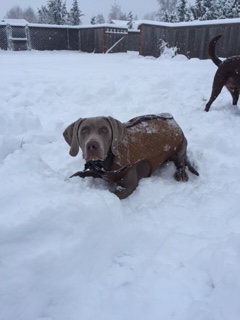 Roy is doing great! He weighs around 60 lbs and goes in tomorrow 1/12 to get his neuter. He’s such a cuddle bug, his favorite thing is running. Well, that is other than cuddling in bed. We go to the dog park pretty regularly and he loves all the friends!

Tags: Snow and the Weimaraner, Weims in the snow 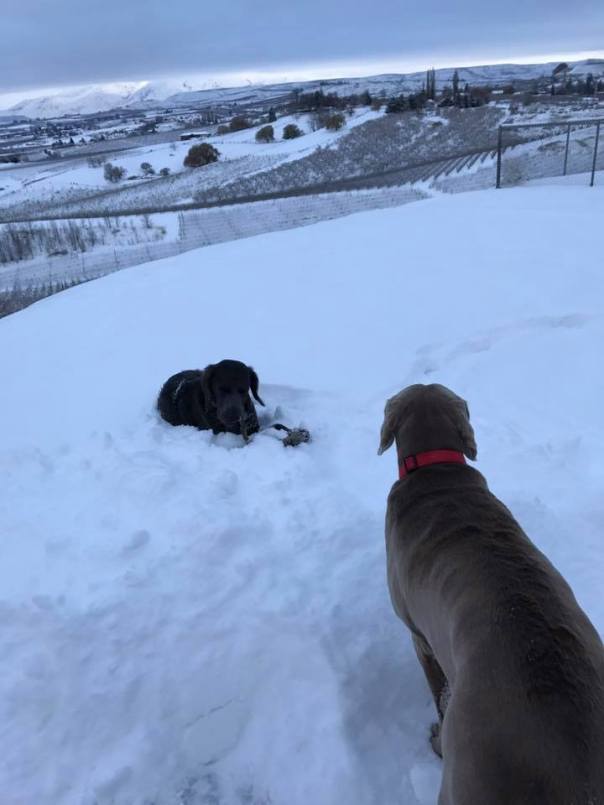 Winter has been pushing fall back and making its wishes known for quite some time. Honestly, snow, icy roads, and colder temperatures are not unique to Eastern Oregon. The more temperate regions have been blessed as well. Hey Winter– did you know your official arrival is slated for Wednesday, December 21st? Winter Solstice typically is either the 21st or 22nd of December.

Near Yakima Cooper looks on as his Blue Longhair brother Levi enjoys a dip in the snow. I suppose he got snow on his toe tassels. That is probably one of the few downsides. For those that love the Longhair, they dread the fact that I mention some people have the tassels trimmed. There is something addictive about the feathering once you get into it.

This Week on the Blog

Here are the week’s posts if you wish you may review or visit them today!  We know everyone is insanely busy, but we still have the Weim-thing don’t we?

On a very personal note

Cliff has the pellet stove installed. We are very thankful to have it running with the extreme cold weather. The whole area is not complete; however, it will be finished soon I hope. We still have the upper wall, and mantel work left to complete. More importantly, it is perking along and keeping us warm.

With that complete, he is working on the entrance. Of course, we would have liked it finished earlier, but something else is always requiring our attention.

I am still struggling with the Bronchitis. Cliff said, “I don’t think you are getting better.” I replied that they will not give me better antibiotics until these fail to work. (OMG) I have tried to whip it without anything unsuccessfully. I think it is important to avoid antibiotics when possible. I believe that it helped my immune system by not just running to the doctor. I am still hoping this will work. I am about halfway into the ten-day regime. As Cliff says, I am coughing about the same. Who can say? I am thinking positive thoughts.

There is no way we could ever thank you enough for your love and support. We are in need of a few stories to get through the December blogging. Several of you have promised; however, we understand how busy you might be–nevertheless if you can send along something we would

Making memories for a lifetime……..

It is not hard to come up stories from when we were kids. They are often indelibly etched on our psyche. These are those moments in time we visit (sometimes willingly, and sometimes unwillingly) from our childhood. We remember them when something triggers the on-button, and it can be anything; a sound, a smell, an event. We may not be able to conjure up this same emotional archived moment at-will; however, it is stored in our subconscious. Other times we can remember by choice. I will never bite into an apple without taking a journey back in time–to our front-porch. I was about four years old, and there was a basket of apples on the front stoop. I reached down and took a bite, chewed, swallowed, and then saw the half-of-a-worm crawling on into the apple. How can I remember that event? I was only three or four, and it was something my mother hardly gave notice. I vividly remember it. I opened my mouth (wide) and let out an ear-shattering scream. I watched for worms thereafter. We can have good memories, and traumatic ones. Sometimes, our perspective (as with mine) is laughable. I have other memories that I want to recreate. Some of these are pretty impossible, but they warm my heart in a special way. Many are tied to a snow-storm. This winter, you and your Weimaraner might be in the business of making special snow-related memories. Here is a video taken in Boise that could easily qualify as memory-fodder.

Tags: Memories with the Weim, Sled-pulling Weim, Snow and the Weimaraner, Weims in the snow 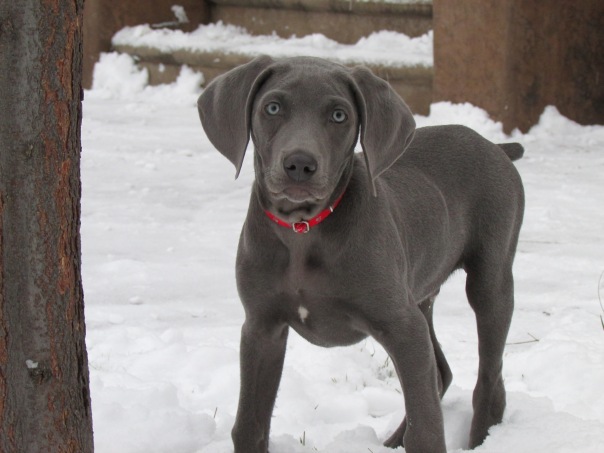 Hello this is Kaitlin, Murphy’s Mom!

We had a Snow day the other day and I was determined to take advantage of it since I didn’t have work! Murphy and I spent the day at my parents house in Boise playing in the snow. We went sledding, shoveled driveways, and chased each other in the yard. He did amazing and slept like a champ that night 🙂

Murphy is now 13 weeks and growing so fast 😦 he is 20 pounds now. He has the best personality and everyone loves him.

It will be interesting to see what he thinks of the next season since the snow has been around a lot.

We hope you guys are doing well and the holidays went well!

Breeder’s Note: Thank you Kaitlin for keeping us apprised of Murphy’s development and activities. We truly appreciate it! For those reading this update, here is previous blog featuring Murphy: Click Here!

We rarely have pups until they are a bit old, but we still have one of Murphy’s brothers available. He is lovely, and ready to go anytime to the right family. At OwyheeStar, we have a placement process that applies to each applicant. We always do things in the same manner. The first step is to complete our formal application. You must get the link directly from Shela via email– (shela@owyheestar.com)

Here are two other updates from this litter: