I know I expressed concern over Ace’s size – and sometimes loose stools, I think I have been stressing way too much about his growth and the late afternoon loose stools.

He (Ace) by all appearances is healthy, and now that I realize he is probably going to be somewhat undersized (which I don’t care) I am able to breathe a sign of relief. He is perfect in every other way. I can’t thank you enough for your support. You and Cliff do an amazing job! ~Dee

We understand that he is your baby and you could be overly concerned about every detail. He looks to be thriving to us–about what we would expect. We didn’t realize he would be smaller–even though that particular lineage does produce small-sized Weims. No one can guess size when the DNA pool draws from a larger grouping of various sized Weimaraners. The pup can take its cue from any number of ancestors–ultimately, health is the essential factor. Thanks for updating us!

The big and the small of it 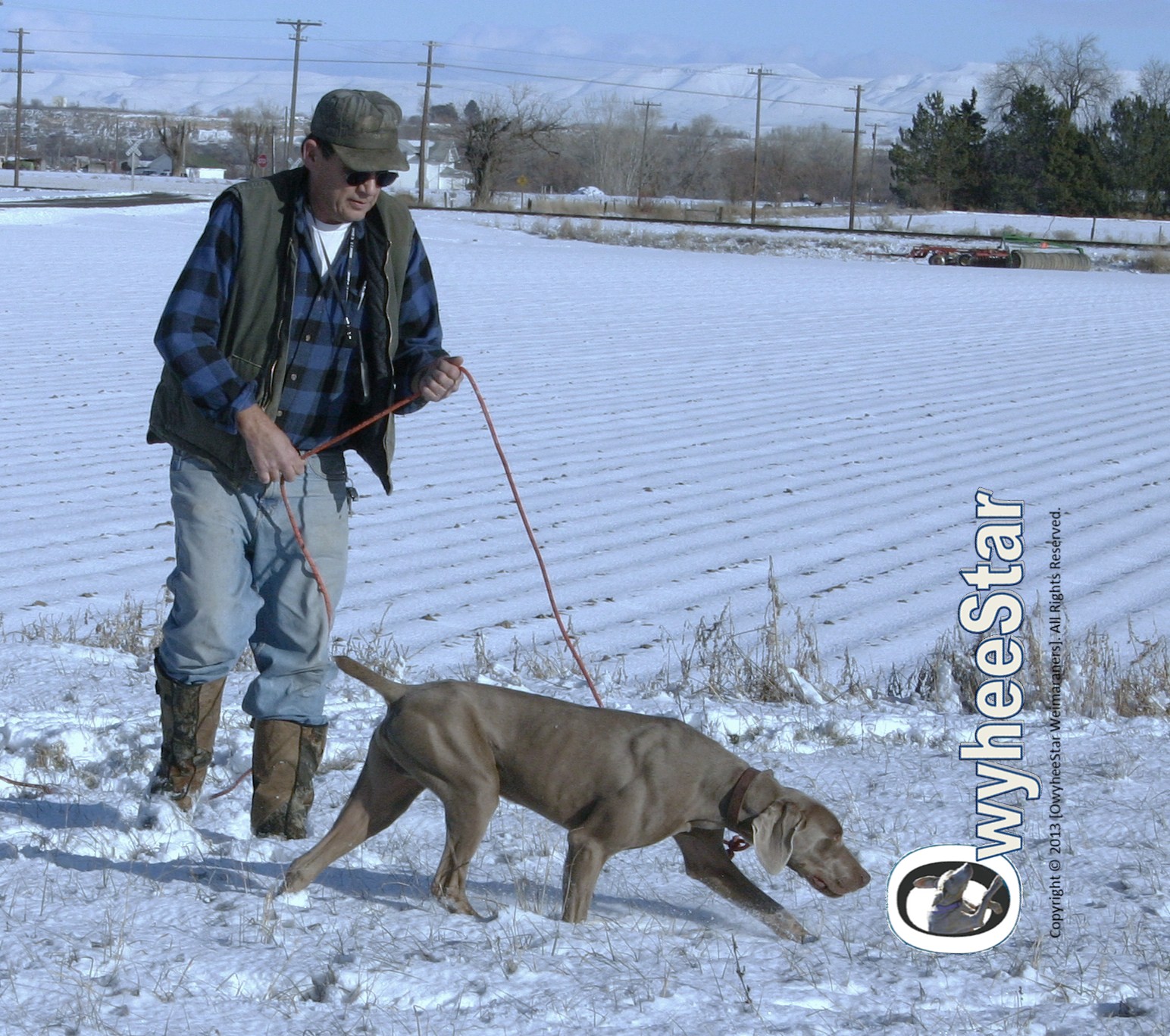 Or how does size play into the equation?

We received a couple of new inquiries this week (well, more than a couple). Sometimes a theme develops when reading through what people write to us. Weimaraner size jumped off the page, and as much as we believe it is not a huge issue, others may not agree with us. The American Versatile Hunting Weimaraner has been bred down in size. There are reasons for this, but competing with other points and versatile hunters those raising these wonderful creatures retained pups on the smaller side of the breed standard.

OwyheeStar’s Zum Ziel (Call Name Zee) is a perfect example of this phenomenon. He topped out at about 70 lbs. His pedigree reads like a wish list anyone raising hunting Weims might compile. The mother and the father have a long list of noteworthy achievements. His father achieved the status of two-time National Amateur Field Champion (within a five year period). Folks, if you do not know, that is a huge achievement. One Weimaraner a year earns that designation. To do that twice in a five-year period is the stuff of dreams. You will find that most of the top hunting companions are going to resemble him–the females being smaller yet.

These more compact Weims bring personality, and super friendliness into the equation, and well as super speed. They are light-footed, loving, and personable. Many non-hunters have discovered they love the pups from these lineages rather than the larger-size Weimaraner.

The other side of the coin… 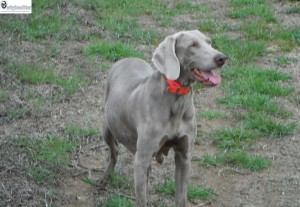 We get folks having had a giant (or very large Weim) that are seeking a repeat performance.

Looking to find what you had before, that is another topic, for a different day. There is no replacing one Weim with a second. It is as with our children, each has their own unique attributes. Regardless, some folks are in love with the idea of finding a large-sized Weim. The reasons are many, some (like we said) are looking for a similar experience. Many equate looks (size, body shape) as the best way to achieve that goal. Others, are looking for a big brush-working Weim.

Greta is large for a female. She is not light-footed, nor does she sit lightly on your lap. She feels she is a lap-Weim. Don’t they all? She is as large as an average male, and certainly larger than Zee. She is beautiful, but certainly not considered petite.

For the hunt-breeders, we might mention that she has produced some nice hunting companions. Her  lineage has proven their field-savvy (as well as the ability to perform); netting large numbers of birds. We have other (larger than Zee) Stud dogs that have also achieved merit–Stackhouse to mention one. He out performed nearly all the compact versatile hunters, and impressed a lot of the hunt club folks with his field ability.

How Important is size?

We look at this different than the folks searching for another large, or a petite Weimaraner. There are many factors other than size. Our goal is to weave the DNA in a manner to produce a well-balanced, healthy, and a trainable Weimaraner. We do this by combining various DNA pools. This gives us the best chance to do this across the board. Breeding for size, brings limitations that we don’t want to impose. Approaching this process in this manner, also keeps us closer to the breed standard. We don’t want to be raising the giant or miniature Weimaraner. There are other benefits to this approach. For example, by keeping closer to the breed standard you are going to see less wear and tear on the joints and hips–better body structure. Someone mentioned a female that was in the hundred-pound range–in fact, weighing in excess of that. To us, this is way too large for the female. We are positive that she had many redeeming attributes, but as a breeder, you must consider the big picture. Focusing on any one aspect is a sure way to get off target.

We take requests seriously. People who want a smaller size, will get the smallest we can manage. At the same time, there will be other considerations and criteria. All things being equal, if we have two pups, basically the same across the board. If one appears to be smaller boned, and more likely to remain a bit smaller, they would get that pup. Likewise, should someone want a larger Weim; we will direct that person’s attention to litter (or a possible) future litter that would produce a pup more to their liking. We are not going to try to sell people on getting something, (because that is what we have available). It is important to hear what the person wants and needs. Finally, it is vital to balance this with what is in the best interest for all concerned–the person wanting the Weim, the breed as a whole, and the pup’s future.

Posted in Health and Wellness, Information and Education