In Our Arms for a Moment

In our heart forever–

They all too soon outgrow being carried around–this is not a purse-tote baby. The truth is your lap, scrunched into the chair, or snuggled on the sofa works well for the Weimaraner. Velcro closeness is a thing.

No one is happier about the work at home scenario than our Weimaraners. One word of caution, though–severe separation anxiety (or a feeling of abandonment) is a strong possibility when things return to normal. You must prepare them adequately for you to be gone. (OMG)

~Who Needs a Weighted Blanket?

Imagines such as this appear across the Internet–and they speak to our heart and soul. Some might say the Weimaraner is too large for a lap dog. Ask the Weimar, and they will assure you that there is always room–if the human is willing. Well, shoot even if the human is not willing the Weimaraner can make the room.

If you are considering this breed and want to relegate them to the yard or out of the family area–we suggest you look at a different fur family member choice. The Weimaraner might be the ultimate Velcro Companion.

Whatever you are doing, the Weimaraner wants to be included–well, some will skip sharing the shower, but not everyone. Most certainly, they are the ultimate confidant keeping your secrets–and at the same time putting a paw on your weaknesses. Yes, they know how to exploit any situation. Our relationship is complex, don’t you agree?

~Beautiful Thief, she is–

When ever I take a shower, I have to leave the door cracked, otherwise, she will scratch and whine, waking up the rest of the house (she gets quite loud, haha).

And EVERY single time I get out of the shower, I have a piece of clothing “gone”….yep my beautiful Weim is a “thief”.  I  usually find it under her, or in her mouth.  She hasn’t damaged anything (yet),  but if I’m missing something, all I have to do is find her (which isn’t hard) and I’ll find my clothes.  Gotta love little thieves (lol).

Looking forward to our next thief!
Robin and Mark

Well, we have been friends for a long time–like so many people in our life, it was the Weimaraner that introduced us. This addiction to this crazy breed cannot be explained to everyone. It is most certainly not for everyone, either. (That being said)–we look forward to placing another with you as soon as possible. Thank you–for your loyalty, friendship, and the love of the Weimaraner.

Since today (7/13) is Jedi’s birthday I thought I’d share this with you. We had a baby in May, Owen. Owen and Jedi are taking to each other very well! Jedi follows me all over the house when I’m holding Owen. 🙂

There have been so many changes since you brought home Jedi. It seems like yesterday he was in your wedding photos. What a grand job you have done with him.

What Does Your Weim Do? 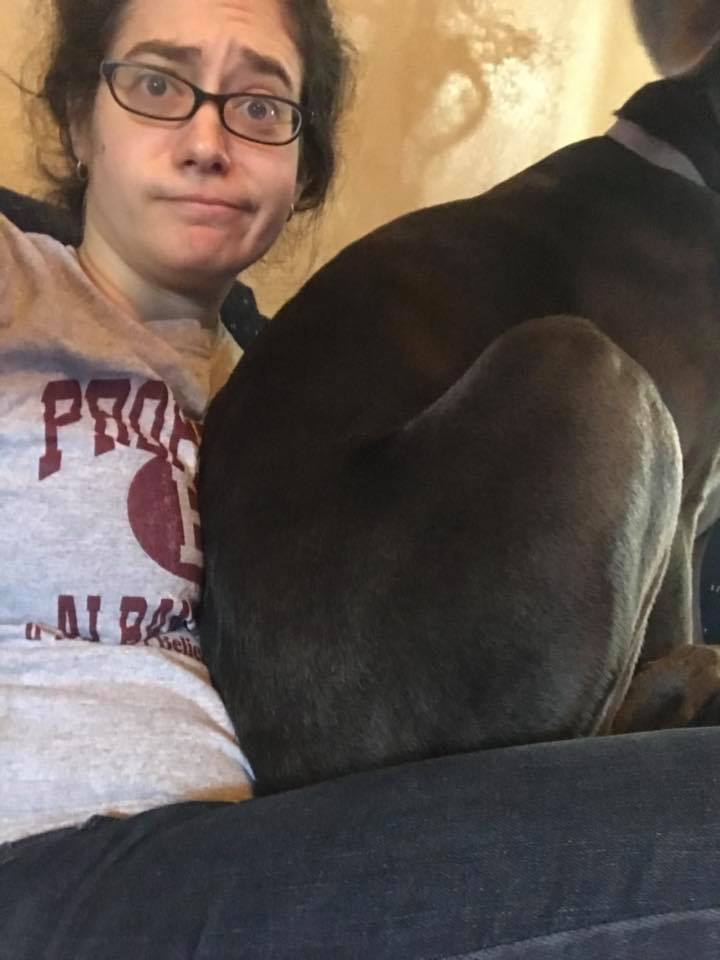 We who love the breed know they are the ultimate velcro dog. This attribute can work against us; however, most Weimlovers are addicted to this trait. New to the Weimaraner–you might be shocked at a large breed being this clingy. They are also prone to separation anxiety.

When present you are their security blanket. When their humans are absent, the unprepared Weimaraner may freak out. All too many have ended up in rescue or a shelter because unaware admirers acquired them only to discover they couldn’t live with them. Not understanding the separation anxiety lead to unearned freedom and coming home to destruction. It might be your favorite shoes. The sofa arm by the front window or the carpet might be the target of the Weim’s reaction to feeling abandoned. The arm-missing-castoff-sofas greet the unsuspecting returning owner. Most often the human counterpart is perplexed. They might have had a Weim before that didn’t behave like this; however, in this instance, something went awry. Your absence causes them to act out–typically chewing up something to relieve their stress. They fear you will not return to them. You forgot them. The amount of destruction can vary. Sometimes the Weimaraner can escape the environment and give chase looking for you–desperate to find you. The last scenario has ended in a loss more times than you can imagine.

Ari and Zeus made this mess for fun

Separation anxiety can take other forms. Some Weims sulk and then chew because they are upset with you. Nevertheless, they might withhold their love and refuse to even look at you. When your response is heartbrokenness and trying to win back their affection, they have the upper paw. Now, they can expand their toolbox with extreme manipulation. So, they can chew to relieve stress. They can chew because it has become a habit. They can chew to punish you. For those who are less committed, you can see how this can spin out of control.

Spiraling Out of Control

When coupled with incessant barking (and your neighbors are reporting you to the police) the destructive Weimaraner soon becomes abhorrent. People imagine that they would never dump their Weim at a shelter. Unfortunately, it happens too often. Therefore, our application process looks to discover the potential for failure with the breed as well as to gather the vital information necessary. Someone who is offended by us wanting the information may look elsewhere for their Weimaraner. It has to be that way. There are too many ways things can go awry–even for the most dog savvy person.