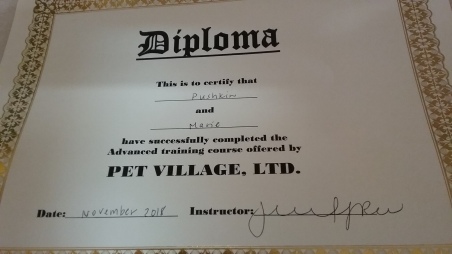 For his 1 year birthday, Pushkin graduated from the advanced obedience course. I was not sure it was going to happen. He was fussing while other people and their dogs were going through their paces so I decided to take him outside for a couple of minutes. Unfortunately, just before we got to the door his training collar came loose. That would not have been too bad if someone had not dropped a pork roll on the floor. He spied that, ran over and got it and took off like a bat out of Hades. He was all over the facility and would not respond to a recall as he knew he was in trouble.

I finally got him to sit and did a return and grabbed him by the scruff. Jennifer (the trainer) came over and held him while I got his collar back on. We waited until all of the other dogs finished and then went through the commands. He behaved quite well.
Go figure! Everyone in the class clapped for him when we finished. Ya gotta love the Wiley Weims! 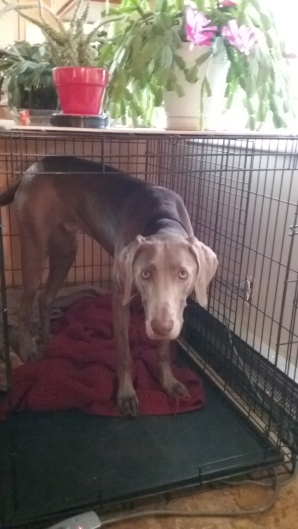 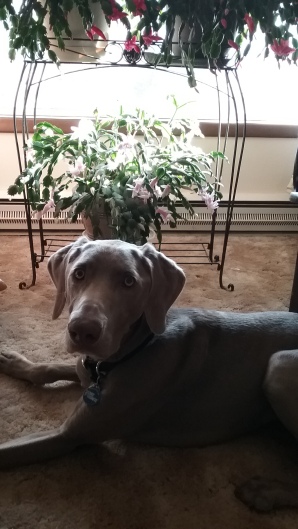 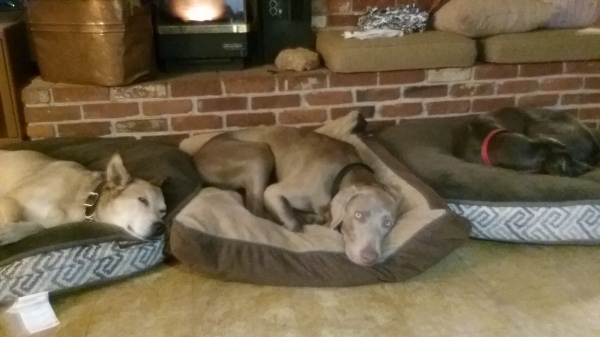 I hope you have a happy Thanksgiving.
Marie 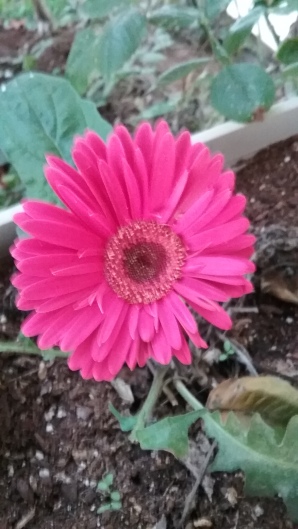 PS: These two flowers apparently do not realize that it is November

What to say? We feel your pain–especially Cliff, who had something like this happen to him as well. (OMG) Congratulations on earning the Advanced Obedience. We could not be prouder of the two of you! Oh, and lucky you to have the late season blossoms. 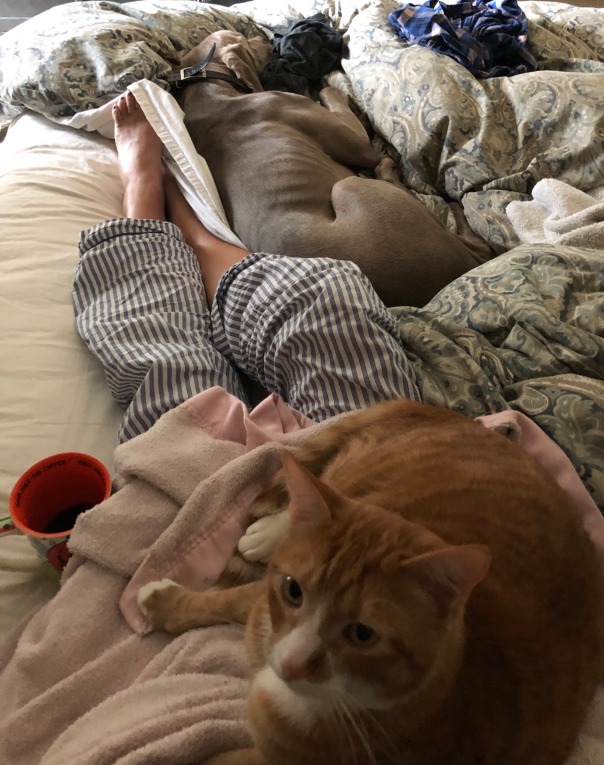 Good morning,
I am sitting in bed with my coffee and a snuggled in Weim laying over my legs, and I was thinking about how sudden it seems that Henry has transitioned from wild puppy to this mostly well-behaved dog.
The last message I sent you was when I was teaching Henry how to close the door, he nailed that in less than a week unless he swings the door the wrong way, he closes the door no matter where we are when we give him the command. This trick is exclusive to one door however, we have tried to get him to close other doors, but he runs down to the back door every time, often confused that this door isn’t even open. Lol. I would not be surprised however if he knew how to close every door, but plays dumb until we get out the treats and hand them out like candy until he has learned how to close each door. Someday I want to make a cardboard sign and write “will work for food” and take pictures of Henry, this dog is beyond highly motivated to learn for treats. Back to his human brain, when we open the back door and give our command “go potty” now he comes up and closes the door instead of going outside when he doesn’t need to go. It is crazy to think that his boy has used this trick almost as a way to talk “I don’t need to go potty right now!” 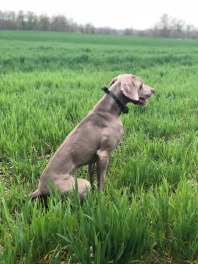 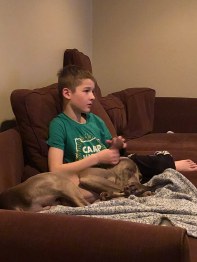 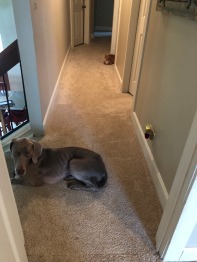 I’ve mentioned before that Henry excels in two sports, being very active, and being REALLY lazy. This works out perfect for us, I sleep during the day, and Kevin works from home, so Henry is pretty chill on work days. Unless of course, he sees me put on anything the resembles work out clothes, topped with my running shoes, he goes nuts!!! There are some days that I need to just get out really quick without distraction. I have to ask Kevin to hide Henry from me so I can leave the house. If this procedure isn’t followed, Henry literally whines for the entire time I am gone. We can’t say W.A.L.K.  out loud anymore, he’s like a child who hears at some point we are doing something, then continues to ask over and over again about when we are going to be doing that said thing, he runs back and forth to each door, whines, etc. He loves his walks and loves them even more with his E-collar. Disclaimer, we live in the country with very little traffic, I would never allow Henry to go leashless other than around home.  We’ve done our walk so many times, he knows the spots I reign him in, he heals (his version is just some part of his body near my heal) when he is too far away from me and a car is coming in either direction I tell him to sit and wait, I either release him when the car passes, or when I catch up to him I command him to heal, he does this until I say “ok” then he sprints away. He knows our turn around spots, and he always stays on the side of the road we are walking on. He has a few friends on our road that he runs fence lines with. A four-mile walk for me is probably 6 miles for him, between sprinting through fields and running with his friends. Lastly, it’s rare he breaks from my side when we see oncoming walkers with dogs. Sometimes I’ll have him heal, sometimes I’ll have him hold a sit until they walk past. The problem happens when he hears (always in a high pitched voice) “your dog is so beautiful” or some similar compliment. It’s like he knows they are talking about him and instantly he wants to be friends. By the way, all of this is with almost no electrical correction, we just use it because he is a dog after all, and you never know when you need to reign them in.

Thank you, for sharing this information about Henry. Everyone likes to read what others experience–how they train and manage their Weimaraner. We so appreciate all you have done with and for Henry. Keep up your efforts.

At two–you expect them to turn a corner. Nonetheless, many claim Weimaraner teenage flakiness can pop up even until they are past their third birthday. Then too–we are talking about the Weimaraner. Do they ever grow up? Good question. There are always the Weimaraner quirks and quandaries. Some of this is directly related to your relationship and how easy you are to manipulate. Some of it is the breed. Kudo’s to this family who finds a way to go above and beyond with Henry. 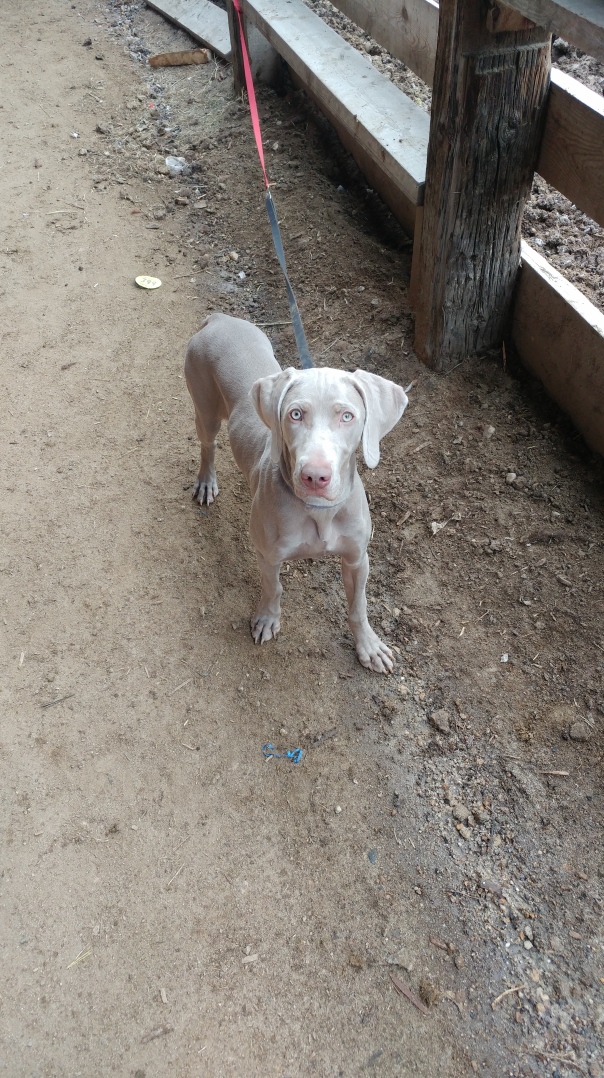 Kaizer experienced his first snow this last week, he had to stop almost every 20 feet on walks to stop and take a bite of it.  it was very comical to watch him wipe out repeatedly when he would try to chase his ball outside.

Christmas With the Gray Ghost 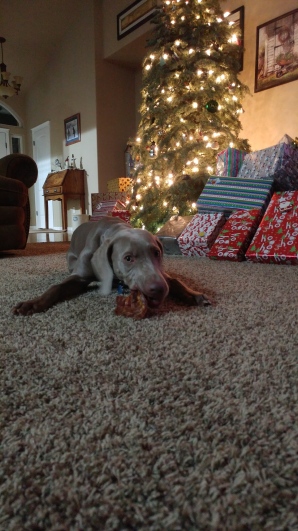 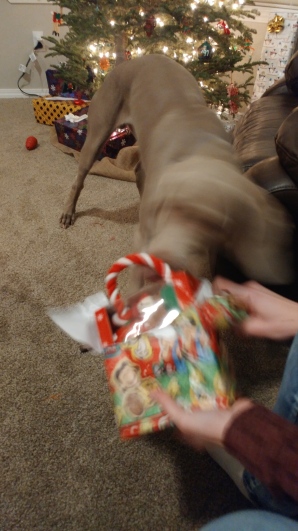 Surprisingly he didn’t destroy the tree or eat any ornaments and only once did I catch him proudly walking around with one of the wrapped gifts in his mouth.  when it came time to open his little gift he attacked with such ferocity that all the camera could catch was a blur.  Hope you all had a very merry Christmas and a Happy new year! 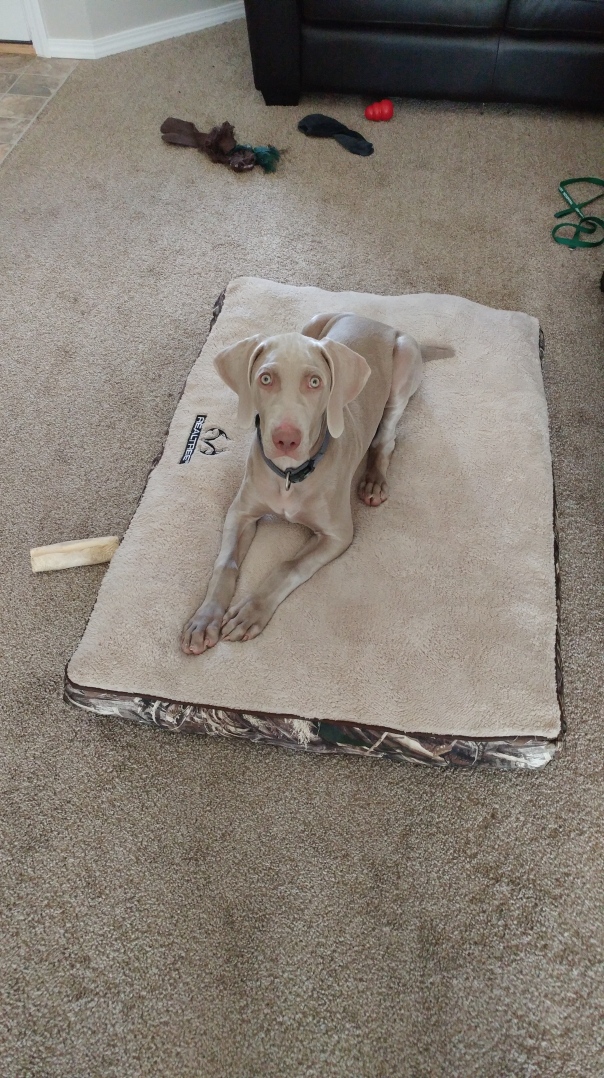 “Looking Innocent and for the most part, I am.” “Woof!”

Isn’t it interesting he has his gift? You did well to capture a blurred photo. Thanks! There were several Facebook Posts where the Weimaraner got their present–didn’t touch the others. Then too–there were rumors of those who pilfered without preference at the tree. Some liking to unwrap the gifts more than anything. Others left the tree alone but not by choice.

We have not heard of any Weims eating Christmas Tree Limbs or goodies that sent them to the Emergency. For that, we are exceedingly glad. The fact the young Kaiser is doing so well speaks volumes about your work with him. Keep it up! We look forward to reading about his birding experience. Thanks for thinking of us! 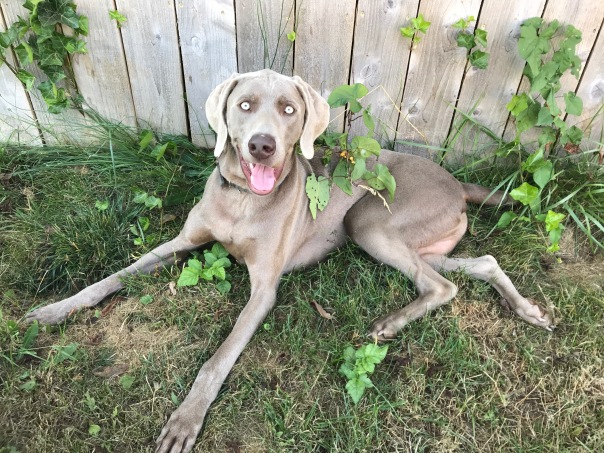 Good morning! We have now had Leo a whole year! He is a wild boy, loving and thinks he’s one of our kids! I thought you’d enjoy this silly photo of him I took yesterday, he was loving rolling around in these morning glory vines in the heat. We sure love this goofy baby!

You may or may not remember Leo’s previous posts. Here is a couple if you wish to look back. 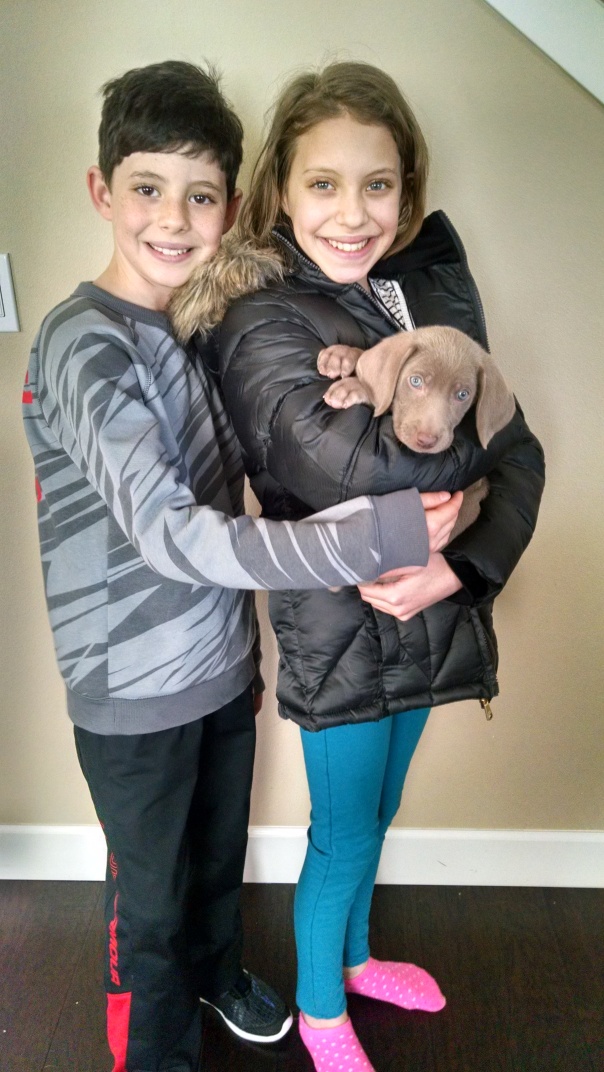 Thank you, Shela for the additional information. Your emails have been truly invaluable to us as we are raising a pup for the first time. Timber is settling in very well. She is sleeping in her crate at night and naps there during the day as well. We are all learning the importance of praising Timber’s good behaviors, and are already seeing that payoff, as Timber is already learning what is and isn’t okay to chew on, and that going potty outside results in lots of love 🙂

A New Hunting Partner is needed………

As you know, I’ve owned and hunted weim’s for the past 32 years and my 10 year old male needs to help me train my next hunting partner. My older daughter is 32 and our 1’st weim (Dutchess) joined us when Whitney was 6 months old- it’s been a love affair and commitment to the breed ever since.

We are a two Weim family……

We usually have at least 2 weims at all times, but lost our female (Princess) a little over a year ago–she was 13. Our dogs are actively hunted, and they also sleep on our bed at night. They are full-fledged members of the family. My male comes to the office every day and interacts with my patients, coming into the exam rooms with me.

Samson a fit name for this Weim!

This dog is just awesome- unbelievably smart and with a great personality. I went with the name Samson- he’s so incredibly strong it just fit. This has been a true joy. You guys have done a great job here. Thanks

Breeder’s Note: Skip lives in New Jersey where he has an active medical practice. His friend Michael got a Weim from us last year. Michael’s Weim was recently featured here on the OwyheeStar Weimaraners New’s blog–click here to read more about Minka!

This was the only silver gray male (traditional smooth coat) born to Lacee’s recent litter. The parents are the same as for the now infamous Willow (click here). As you can understand, the good doctor has better things to do that to take photos of his new fur family member. The photo was from the OwyheeStar archives. Below is Lacee with her recent litter (all have went to live with their new forever families).