Now that spring seems to finally be here Loki and I are having all sorts of adventures. For the last month or so I’ve been working on introducing Loki to water. First, it was getting his toes wet, then the ankles, and so on. I’ve attached a video from this evening— we headed out to the lake after work. Needless to say, we’ve come a little ways from not getting our paws wet. You may notice the cord on the bumper— sometimes Loki needs to remember that the game is retrieving, not keep away, but the water work has seemed to really help this. Also great insurance in case he doesn’t go for it, so I don’t have to swim.

Other adventures include hide-and-go-seek at lunchtime on a trail system near my office. It’s a great game for anyone to play to help their pup remember to check in on hikes, but with Loki, in particular, we want to develop the idea that he can use his nose to find people. When we’re out on the trail, I wait until he gets just a little too far ahead of me, and I hide in the bushes next to the trail where I can still see him. He is quick to notice that I’m no longer in sight, so he runs back down the trail. He usually goes past me until he hits my scent (in the air), and then he usually works the scent cone back towards me. When he finds me, we enthusiastically play with his favorite toy.
Another new thing is teaching Loki to pull me on my longboard. I keep it short and easy so as to not stress his joints, but it’s a great way to practice verbal directive commands. And to take the edge off the wiggles!
Loki is also turning into quite a camping dog. Last week was his first tent camping adventure in Glacier National Park over Memorial Day weekend.
The two pictures I’m sharing here show our work on the down-stay (he’s not tied in either). You can see the drool starting to come with the cheese! That’s what happens to those who attempt to counter surf. He got no cheese. 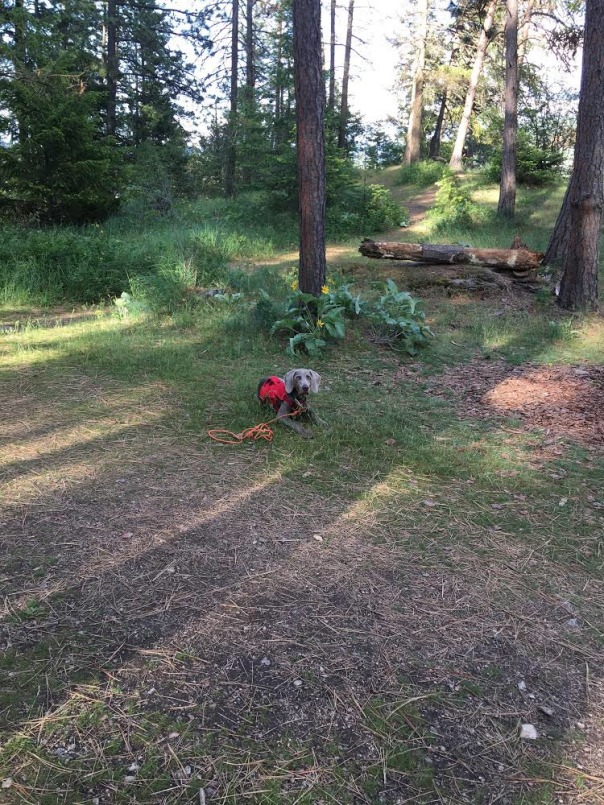 As always, we constantly incorporate sit-down-stay-heel-come into our daily routine. The heel is finally taking hold— at least 50% loose-leash on a flat collar, and his off-leash heel is almost better. The red harness he’s wearing in the picture is his working harness and includes a handle to help keep him safe on the chairlift. We are working on associating it with good listening and lots of fun search games.
Anyway, I can’t believe he’s 6 months old already! It has gone so fast. ~ Erica

We are so delighted to see all that Loki has learned thus far–in such a short time. The development of his nose–scenting for the human is coming along nicely. The water work, the basic obedience, and all continue to come together. You are doing fantastic with him on every level. Thank you, for the diligent effort you are investing in training for the well-balanced (Search and Rescue ready) Weimaraner. Also, thank you for keeping us informed. We love being a part of the journey. We realize he is a typical Weimaraner in many ways (such as the counter-surfing thing); however, it remains to be seen what the two of you can become. Go Erica and Loki–we applaud your efforts.

Loki and I have spent much of the last few months frolicking in the snow. We’re training for avalanche rescue which means at this point that we’re spending as much time as we can on the mountain. Loki loves schmoozing the skiers and boarders around the main lodge, and yesterday he had his first ride on my shoulders while I skied.

This weekend we’ll be riding the chairlift. It’s hard to say what Loki’s favorite thing is about the ski hill, but riding down in a gondola filled with ski patrollers has got to be near the top of the list. As we say on the hill, he’s a real little powderhound. 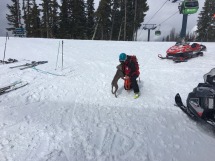 When we’re not on the mountain, I’m working on developing his toy drive with short little breaks of fun, fun play throughout the day. We’ve also started some simple tracking drills and hide-and-go-seek games.

All the best, ~Erica

We are thrilled to hear the news of Loki’s progress as well as to find out he loves snow. It is interesting to get a peek into your world. Thank you, for taking the time to share with our readers and us.

Tags: SAR, Search and Rescue, Snow and the Weimaraner, Weims in the snow

What Did You Do

Woof! And Hello Peeps! My Mama has written to Cliff and Shela with an update that I am confident you will see on the blog in the next day or two. I thought I might drop in and show you what I have been up to on the mountain. First, I was the Easter bunny as you can see. I make a cute one they say.

Then There is This

Woof, Again! Well, I am impressed with what we do. I never imagined this happening when I was back with Mom and the littermates. Here we are flying above the ground (on what they call a chairlift). I guess my ears are handy. Did you see how far down it is?

Thanks, Loki for sharing your exciting news with us. It seems you are busy training with Mom every day. We are excited to hear the news of your achievements as they unfold.

More about our Adventure

We had some trouble early on with puppy biting. When I tried to correct Loki he would get angry, which worried me. I’ve since used your advice, Shela—a good screech stops him in his tracks! Since then, I’ve screeched and redirected him to something he’s allowed to chew on, and I haven’t had many issues this past week. I’m keeping Cliff’s trick in reserve in case we have more serious difficulties in the future, but for now, we’re on a good, positive track. Though Loki did well with the crate the first couple of weeks, he’s become more vocal this past week and I’ve temporarily revoked his office privileges (his crate is now in an area where his complaints won’t bother anyone). I imagine his increasing energy levels have something to do with it, so I’m making sure he gets more exercise, and he still gets some nice breaks from his crate throughout the day. I’m hoping this is just a phase, and that he learns that fussing won’t get him out of his crate (I’m also doing work to make sure that his crate is a positive place for him—he just objects to not being the center of attention, I think!).

We had a nice visit with the vet for Loki’s 9-week shot. She was impressed with the detailed portfolio you sent and is supportive of the vaccine protocol. She is also happy that I’m feeding the Diamond Naturals Large Breed Puppy Chow with the NuVet supplement. Good news—one of Loki’s testes has descended, and the other was in a good position, so I think we’re going to be just fine on that account. She is also an advocate of neutering closer to the 6-month mark rather than to wait longer. 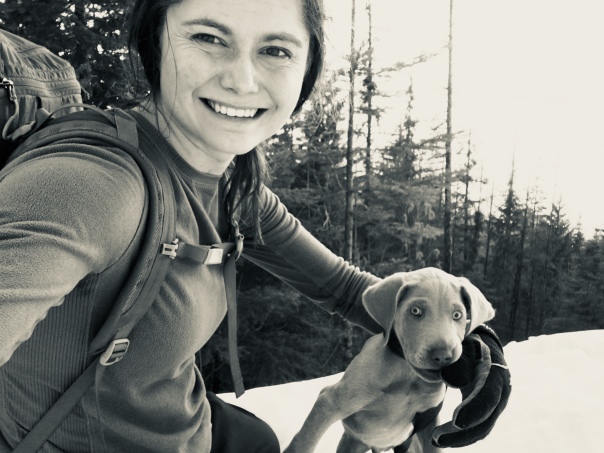 Loki and I are getting along quite nicely. He’s already my little adventure buddy, and he’s always up for snuggle time at the end of the day. I love this little guy—he is so intelligent and energetic. Though I wrote a fair amount about training, to Loki it’s all fun and games, and I intend to keep it that way. Thank you for all your help in selecting Loki. We’ll be sure to keep you updated!

Thanks, Erica, for providing so much information about your process and Loki. The photos were outstanding, too! We look forward to hearing from you in the future. Keep up the great work.

~Part Two– Off to a Grand Beginning

Now that Loki’s had a solid start on the basics (potty and crate training), we’re adding some simple commands. He’s beginning to learn the house rules that my roommate’s dog is expected to follow—sitting and waiting before charging out the door, not jumping up on furniture and being respectful at mealtimes. For the last few days Loki has had to work for his food—he is now responding to “sit,” “down”, “wait”, and “ok!”. When he’s doing well I add something new, and if he’s having a more difficult time I go back and do something easy. I’ve noticed that he’s been more positive and respectful since I began this new meal routine. It also slows down his eating! More importantly, he is learning to settle and look to me– we began with that before I added any verbal commands.

Loki doesn’t know it yet, but there are some big plans for him. Right now he’s focused on being a puppy, but I’m learning and preparing for training a search and rescue canine.  Loki’s formal training will begin once he’s passed the CGC test. For now, we are working on socialization and doing as many new things as possible (that are safe for him at this age, of course). He voluntarily walked for most of a two-hour hike in the snow, had a blast playing with his toy and riding an elevator up and down, and observed the other dogs during an HRD (Human Remains Detection) training. His best-behaved days are the ones where we’ve done something new and exciting, so I’m doing my best to keep him busy!