~Off to a Fabulous Start

Played with his duck for about an hour and fell asleep right on top of it. Such a beautiful dog, thank you so much!

We spent the last three days meeting people with their pups. The homes we have for each pup are extraordinary–and we cannot wait to hear from each family as their journey unfolds. Oliver (AKA Ollie) isn’t looking back, he bonded to his people, and life is so exhausting as you can see.

Tags: Getting off to the right start, Getting started with a puppy, Getting Started with the Weimaraner

~ our thoughts and the process–Day Three 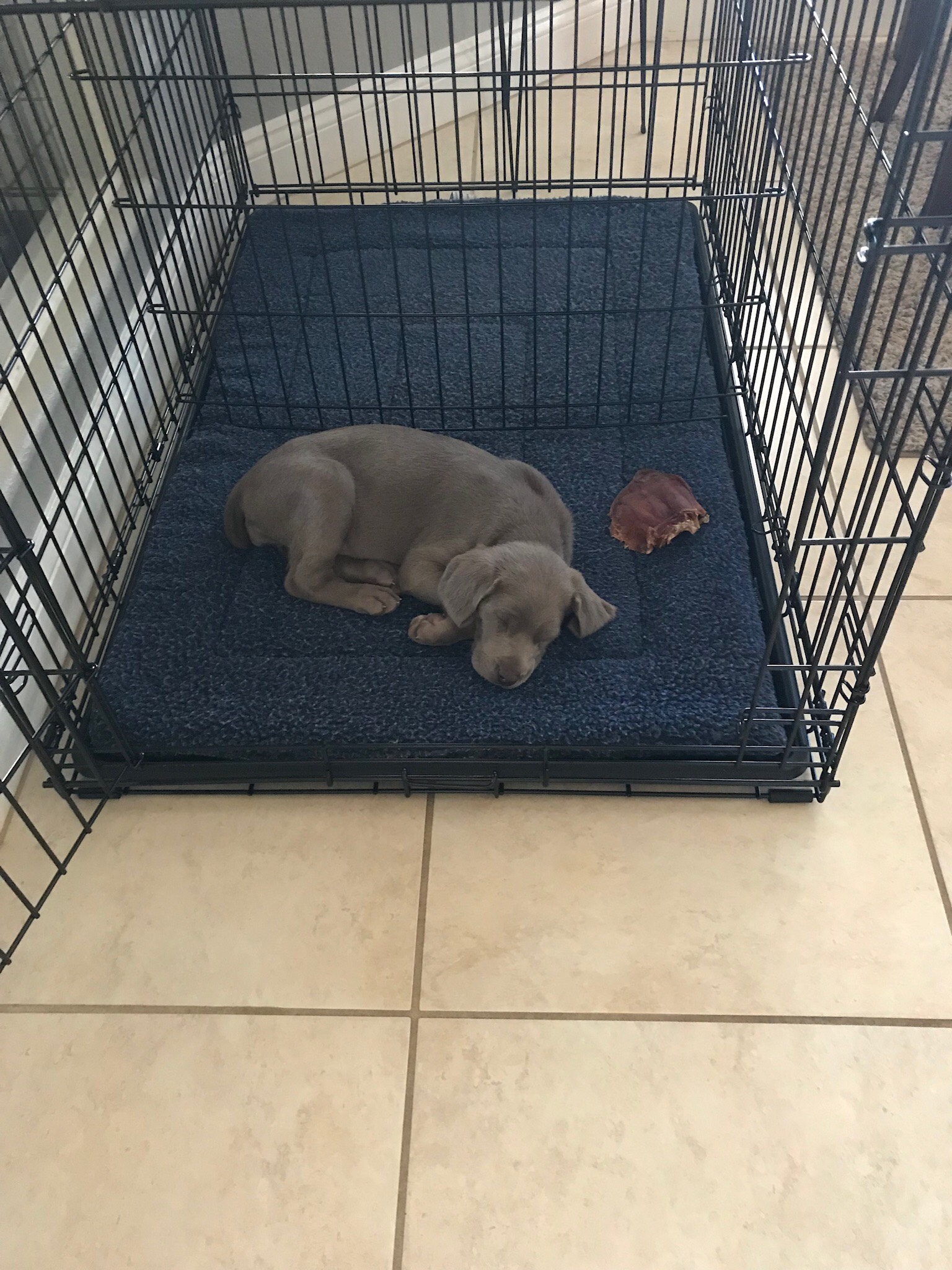 You might remember that Libbie traveled home on the airplane (as her Mom’s carry on luggage). We have had two reports since we met her at the airport. Click Here to read the first, and here to catch the second. The news is a bit old, but it is never too late to share this kind of report, right?

I’m still amazed at her intellect and being able to remember!
Yesterday, was very busy, productive and successful :)! She introduced her herself to the crate in the kitchen, her home while we are away from home. I had the door open hoping she would want to go in and explore, and she did, all on her own with no encouragement! She went in, sniffed around and laid down. After a couple of minutes, she got up, went and got her pig ear, went back into the crate and chewed on it until she fell asleep! Precious!!

I quietly closed the door–she did look at me for a moment then went back to sleep. I disappeared for a while, when I came back she was awake, and I let her out. 1st try success! The door remained open, and she would go in several times throughout the day, taking various toys with her. Finally, she went in and went to sleep, no toy or collar, just her. I took the opportunity to actually leave the house to pick up a few things at the store. I was a little nervous leaving her, not really sure what to expect, and it was the quickest trip I’ve been able to make to the store. I was gone for a little over half an hour. When I got home, she was still sleeping! I quietly unlocked the door, and before I could open it, she woke up. I praised her and took her out. Success!! I was relieved! She continued going in and out with various toys and lying down. I would have to say she loves the crate and feels safe :).

She also learned “come” & “sit.” Scott was super impressed and didn’t believe it was possible till he saw it first hand. We also started with leash walking and will continue that until it’s down pat – our next full focus activity. That seems to be the most challenging, but I’m sure she will get it soon.

Last night, we did our regular routine and went to bed usual time. Omg, Shela, when we went into the bedroom, she went into her crate by herself with no encouragement but was praised, I closed the door, she let out a few barely audible whimpers and went to sleep. She did not make a sound all night!! I got up at my regular time, took her out and praised her. Then on with the usual routine. I am in disbelief with how well she did!

She is learning and getting comfortable with things so fast! We have also been learning “no,” and she pretty much has that down, except for with the puppy play biting. During playtime, She’s like a little piranha, mouth open and looking for something to chomp down on.
I’ve figured out so far to put a toy or pig ear in her mouth when she goes for something. We don’t allow her to chew on, aka my hands, shoes, etc. Well, “no” is not working with this, so I think I’m going to try to find another word that will work.

Ahhhh, she’s so funny and just a cutie! What fun we’ve had the last couple days and a lifetime more to go! We are so blessed!!! 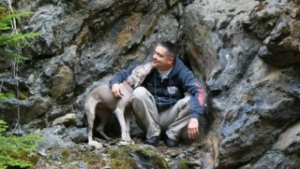 The best Weimaraner people are those that are natural leaders. Any time you feel your relationship is stressed then you are going down the wrong road. The persons that are neither too strict nor too lenient are usually the ones that excel. Regardless of what happens, it is always best to pro-active than to be reactive. Plan little steps of learning and build upon them. Try our 7 steps to Success, and we believe you will be on the right path.

Tags: Getting Started with the Weimaraner, Weimaraner

Frankie is home and adjusting well 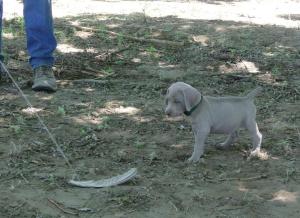 Just thought I’d send you a quick note to let you guys know that our pup, Frankie, is the sweetest and most adorable pup in the world! She made the ride home with no trouble at all after a quick potty just down the road from the Wildhorse. She slept nearly all the way home and settled in at home here in no time. We crated her for a few hours this afternoon which went far better than I expected, and we will begin a proper schedule/routine for her starting tomorrow. Anyway, just wanted to say thanks. We are so happy to have her in our home and assure you she is in the best care possible. ~ Nathan

Hey I got siblings 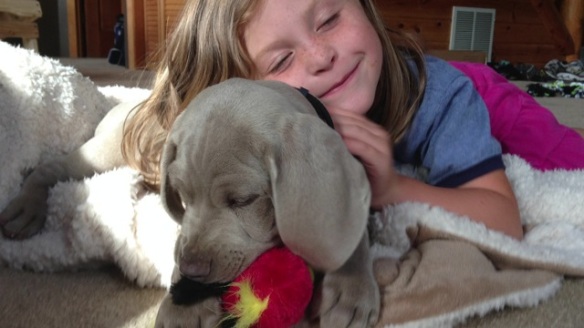 What a great pillow!

Zelda meets her family to!

Zelda slept pretty well last night waking three times to go out and go potty. I made her sleep in her kennel, which she was not excited about but finally decided that she was tired enough that she wasn’t going to fight it 🙂 It still fascinates me how natural the game of fetch is for her, she even sits and waits while I throw the ball/toy.

She is my shadow today, but is starting to venture out in areas where she is comfortable. I turned on the TV this morning and it was funny watching her try and figure out where all the people were!  -Jill

Breeder’s Note: We are always glad when things go as planned. We put a lot of effort into setting each pup up for success. Every pup, and every situation is unique. It is important to get off to a great start. Freedom should be earned, and giving your puppy freedom to roam in the house unsupervised is sure to set them up for problems. Keep on the right path, and make sure the pup is ready for each step as you move forward.