The Crystal Ball is Broken

Where do I turn for help? 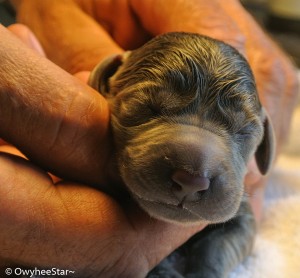 We always feel bad telling people that we have no idea when we can get them a puppy. In reality, we have a plan in the works. Nevertheless, our plans can be thwarted. The female who produced eight pups last year–all females may not this year. There is a possibility of not getting a litter. By chance, we might get more pups, or in the getting, we may realize only a few pups. This year, the litter might be all males, or who knows what sex? The coat color is predictable within some matings, whereas in others it is a guess.

Precious to say the Least

The pup cradled in Cliff’s hands is a newborn blue male–Zula Blue’s first born in her fist-ever litter. Once he arrived, we knew we had a blue male in the litter. We could celebrate his arrival even if everyone waiting (on our waiting list) wanted a silver-gray female. He is precious. We knew the odds of having several blue-coated pups was good, but (in the past) we have mated a Blue Stud to a Blue Female, and produced one blue pup in the litter. A cocky-attitude often leads to embarrassment. We are not much for the unsubstantiated,  or for lofty promises.

This litter was the kind we hope to get in many ways, but some people were disappointed. It is always the way things work. Zula produced eight pups (3 males, and 5 females). One was silver gray–a female. Anyone hoping to get a silver or gray male, was sorely disappointed.

Some of the eight are Internet-Infamous. Others of this litter go about their business of tending their family, and delighting their circle of influence.

The questions that usually remain unanswered until the pup’s arrival were answered. The sex, the coat color, and the number of pups was evident. Octavia (the only silver female) always seem to be found wrapped in a pile of blues.

These are precious memories to us, as well to those that got one of Zula’s puppies.

The first two weeks are crucial. It doesn’t happen often; however, it is not uncommon to lose a puppy during this critical period of development. It is nature’s way of taking care of a problem we suppose, but it doesn’t make it any easier. Neonatal extreme care for puppies is not a practical affair. A puppy born with a congenital (birth) defect often succumbs to it. The loss is devastating, and something we hope to avoid. Keep in mind there is a very small window for a viable birth–fifty-three days from conception is a must, and normally the pups arrive around day sixty-three. They may be a couple of days late for a safe delivery too!

Not every pup is the same age, because life begins at a special individual moment. The swimmers deposited by the Stud Dog are viable for about forty-eight hours. When they arrive at the destination (the ripened, and ready egg), conception happens. Many never find their target, and fail to produce anything. There are more than enough to produce a good-sized litter. Nonetheless, some litters are tiny (1-3 pups). With the pup’s being conceived at varying moments–the whelp may produce a puppy who is not perfectly formed. They are not able to live, because all those inner-workings didn’t have enough time to come together. There are many reasons a pup may not survive. Therefore, we realize we need to wait and assess the situation.

Regardless, the first two weeks everyone holds their breath. Breath-abated we rejoice over every milestone. Each week that passes holds sweet promise. Zula’s babies all thrived, and found the perfect forever-home. It is a storybook ending, and we hope they all live long, and continue to delight for many years.

We mention this to shed light on what a breeder must face. It is our affirmation that healthy (well-adjusted) parents produce, likewise, results. Remember the focus is on similar, but not alike. We have raised enough pups to realize that recreating results is a rare occurrence. Duplication is called cloning. Each puppy is a unique creation, with its own pocket of potential. Some people want a second just like the first, and that is simply-put impossible.

The Internet has Brought Change

Breeders have had to adjust to the new technology. The demands are many, and things that would not have come to light (such as mortality) are brought to the forefront. Anyone who says they have never suffered a loss, is either not telling you the truth, or they have not raised all that many. With increased numbers, comes additional risk. This is a risk worth taking. We choose to focus on the positive, and at the same time disclose the reality. You cannot bring a living creature (even a human baby) into your life without risk. There is no fail-safe program. The Information-Age means that there is an abundance of information, and everyone believes they are an expert. Therefore, any new puppy will come with a plethora of advice from your breeder, friends, family, neighbors, co-workers, trainers, and even the passerby. Despite the intrusion on our lives, the Internet has brought many of us together. This is a fact we can celebrate.

Anyone looking for a puppy has questions. Did we mention it is the Information Age? You cannot go far without reading some horror story, or how someone was scammed. Even beyond those facts, we are confronted with other challenges. Yesterday, the phone rang. We were at a place (and time) when Cliff could grab the call. He did so, and it was an inquiry. He handed me the phone.

Caller, “Are any of those pups still available?”

Shela, “I am sorry, they have all been promised.”

Shela, “I cannot say exactly when, but sometime between now and November.”

Maybe I should have said that our crystal ball is broken, but some people might think that is a flippant remark. Maybe you can understand why we use this terminology, to handle all we cannot control.

More often than not, the phone call inquires come to naught. Many folks are wanting to price-shop, or looking to find an instantly available pup. They are frustrated that we cannot give them something more concrete. Nevertheless, we cannot make promises we cannot keep. To allude to being certain you can get a puppy by a specific date is to give false hope. If the litter doesn’t develop, what do we say? There are so many unknowns, and things that are beyond our control.

Note: This is Zula’s eighth born puppy. You may have seen her around Facebook, etc. Hazy (AKA Hazelnut). The blue female seen with Skye.