Category Archives: Baby and the Weimaraner

We have a New Baby

~Luna adores this baby, too

I am so amazed with how loving the weim is with the baby!

I wasn’t sure how she would be when he came since she is queen bee and center of attention! But she loves the new baby and is always checking in on him.

Maybe several of you have watched this unfold on Facebook, but isn’t it just precious? Of course, they are ever vigilant and watching carefully as Luna and the new little one interact.

Since today (7/13) is Jedi’s birthday I thought I’d share this with you. We had a baby in May, Owen. Owen and Jedi are taking to each other very well! Jedi follows me all over the house when I’m holding Owen. 🙂

There have been so many changes since you brought home Jedi. It seems like yesterday he was in your wedding photos. What a grand job you have done with him.

I wanted to share a bit more about our life with Jake. It has taken me awhile–I was still having a hard time when I think about him. We just went up to the USA to visit my family for the first time in 7 years. We arrived home yesterday. Such an empty feeling came over us when we walked into the house. It wasn’t like we forgot he was gone, but it still feels really odd not to have him here. He held such a special place in our lives and we are absolutely heartbroken. I could have never imagined it would be this hard not to have him around. On our holiday we had heaps of family around and ‘doggie babies’ for my kids to have time with but, the kids would tell me quietly afterward – “that dog is not as good as Jake mum” 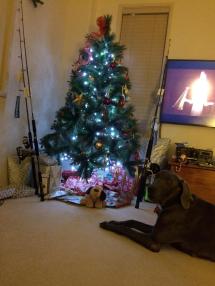 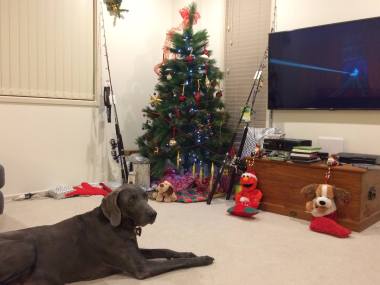 Jake had an incredible ability to sense the energy of everyone around him and adapt his personality to suit. He was the most fun loving dog you would ever meet. He absolutely loved Christmas and would go berserk when we started to get the boxes out from the attic each year. He loved decorating the tree. He would proudly wear his antlers and the light up Christmas collar the kids put on him and join in with every activity. Especially opening presents on Christmas day. 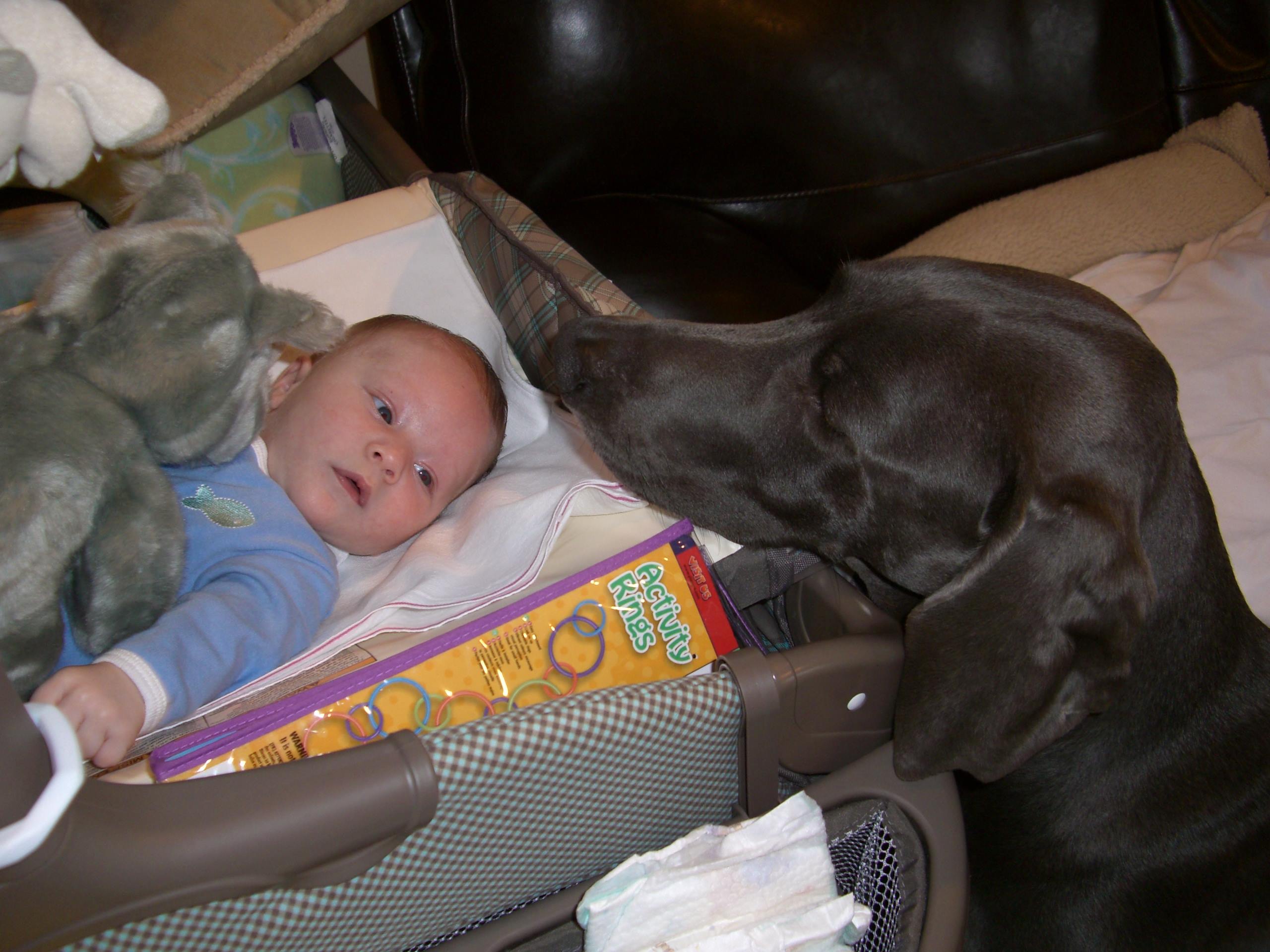 always watching over the kids

He always had an incredible nature with the kids and was the most patient dog you ever met. He put up with sharing his rawhide bones and being poked, prodded and used as a pillow. He had the most joyful personality. He was always up for whatever you wanted to do and would let you know he was incredibly disappointed on the occasion he was not going to be included. I could never imagine what a great friend and partner he would turn out to be, especially with when I was coping with the move to New Zealand. then when the kids came along he was just as willing to love and accept them as he did me. we are all missing him so much still. but we will be eternally grateful for the friend you gave us. 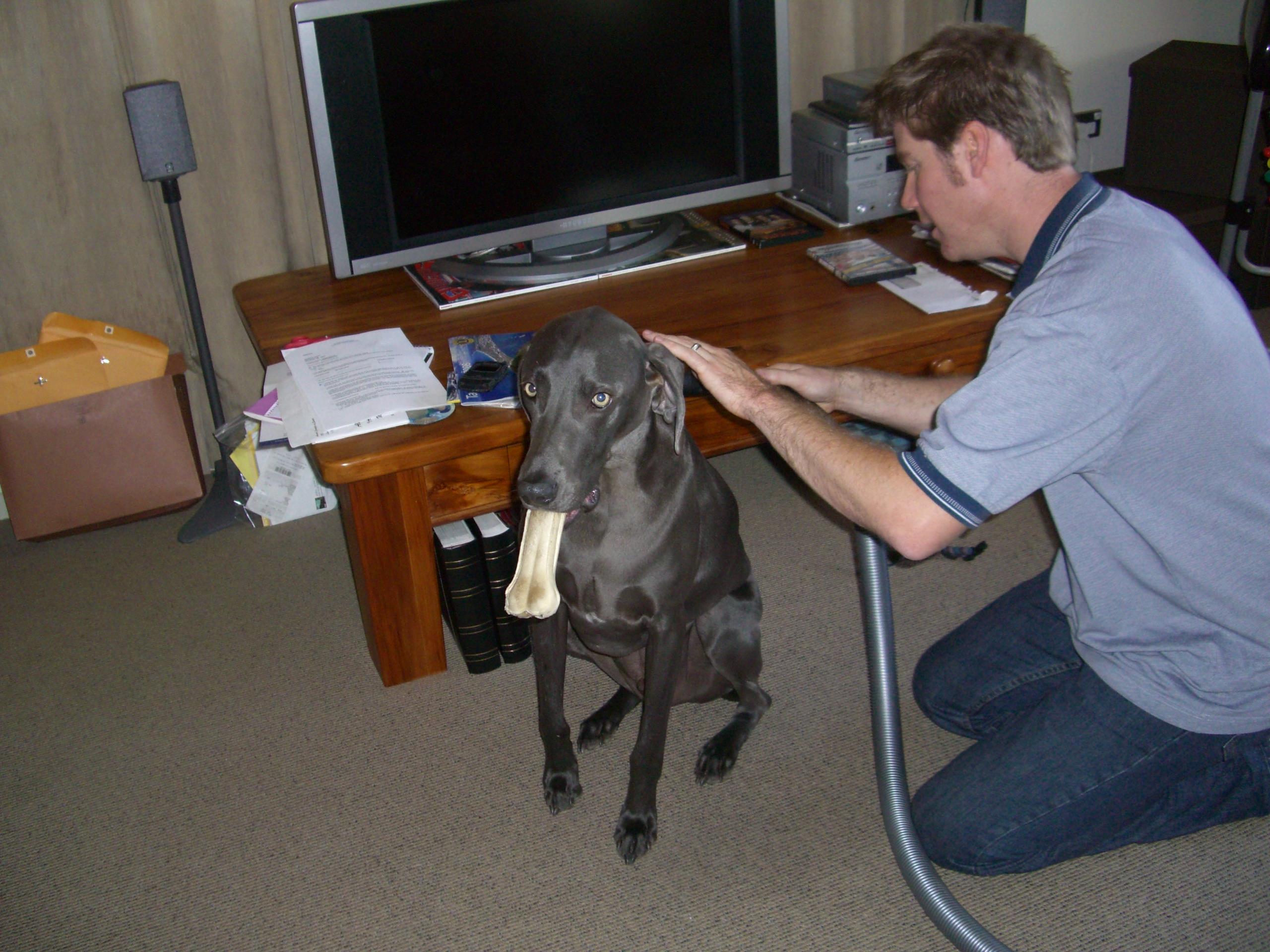 he loved to be vacuumed

We did post the news of his passing–Click Here to read that and to see more photos. We feel the loss with you, as do so many readers. Thank you, for giving him such an excellent life.

Raider Wants You to Wake Up! 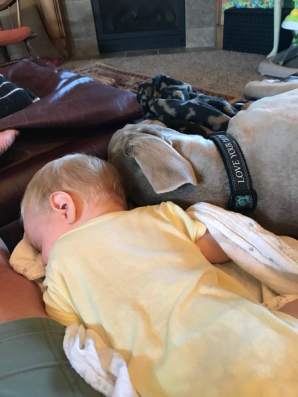 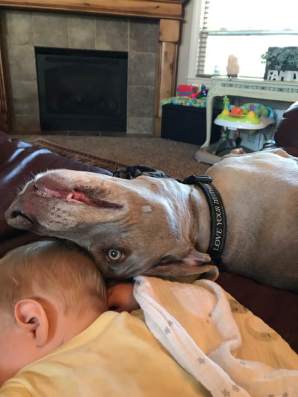 When grandma babysits, and Raider loves to snuggle. All goes well until she wants her baby to wake up—at least Raider wants to show her some intense pressing love.

Posted in Baby and the Weimaraner, Children and Weims, Information and Education, Previous Pup Update, The Weimaraner 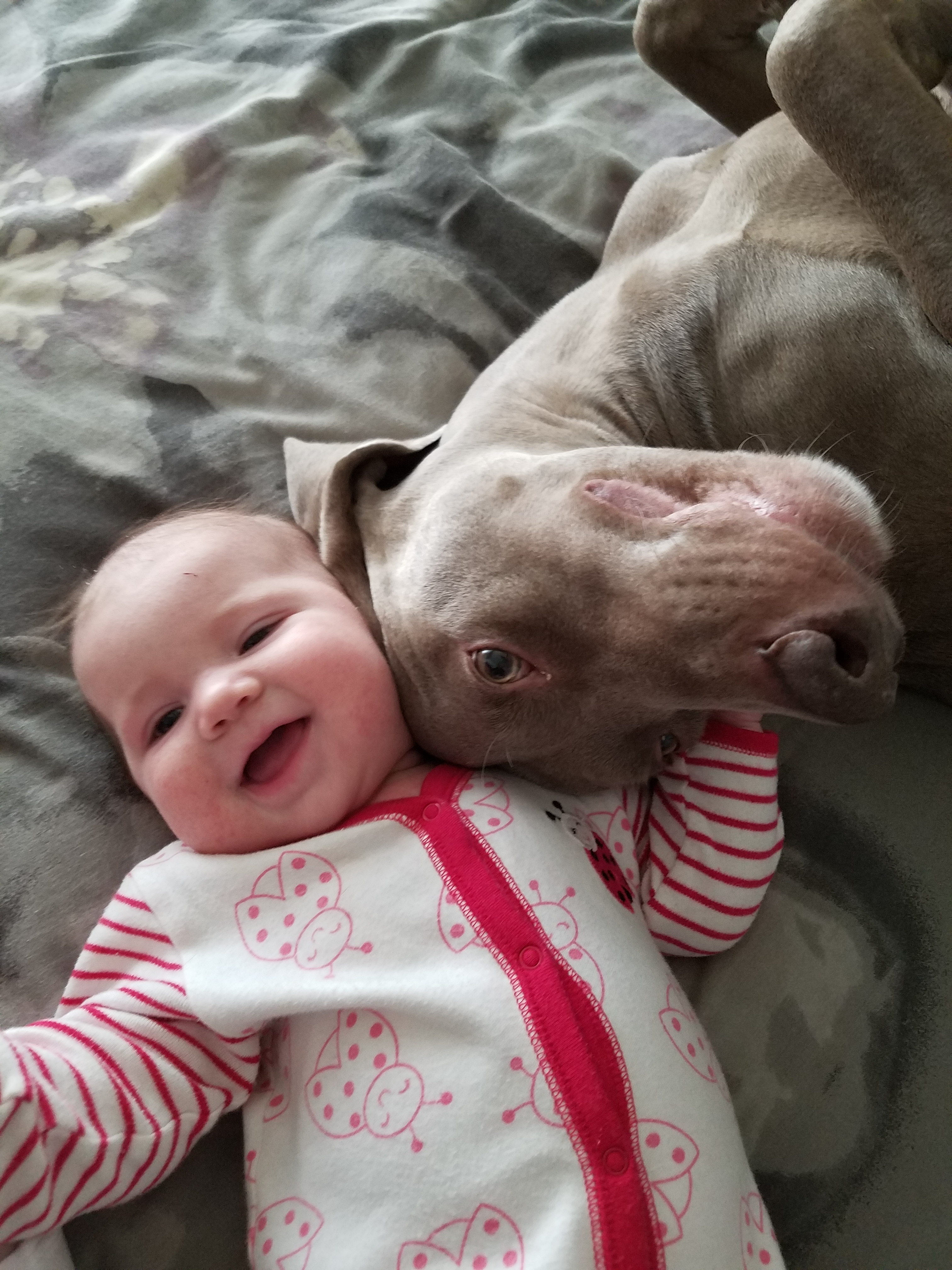 I don’t really send much on Colby these days. But I wanted to take a moment to share a couple photos I snapped of our youngest with him the other day. 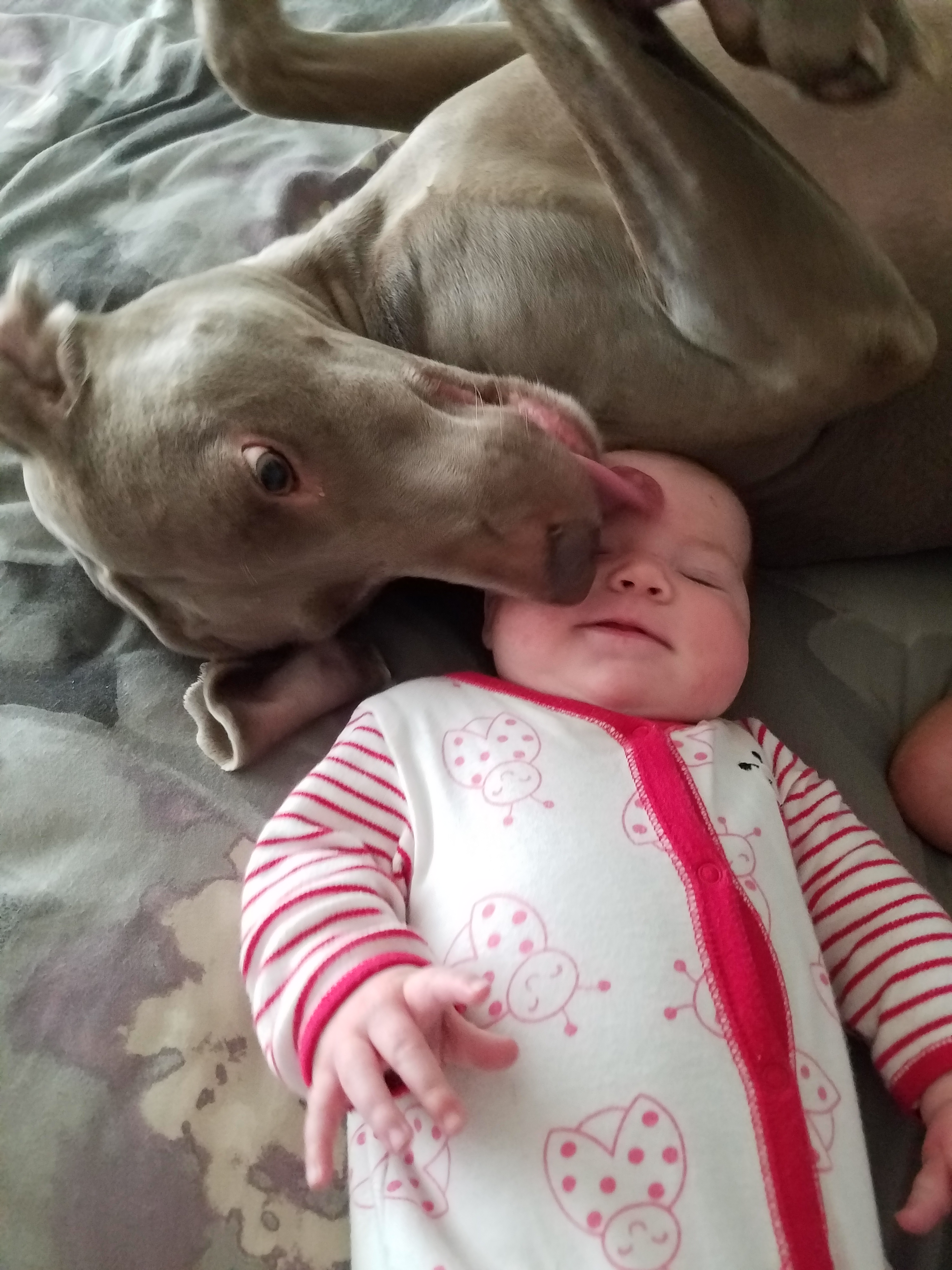 It’s been a little rough for Colby with the passing of our older dog, Sable.  It hit him worse than anyone, since the rest of us were prepared for this to happen.  We’ve been giving him lots of loving and he is milking it pretty well.  Case in point: letting him on the bed with the baby.
He doesn’t know of to be cognicent when she is laying around and stepping on her is a possibility I’d rather avoid.  When he came up to attempt a nap, I charged him a few photos. He grumped off shortly after he realized no nap would be happening here.
The weim grieves loss just like we do. But a little love can help to mend a broken heart.

I think Weimaraners, just as humans, process loss in different ways. Some seem to go on with life and adjust quickly. Others suffer intensely.

It never ceases to amaze me how most Weims adapt to life changes. I truly believe much of this is due to their inclusion in the family. When some add a baby, they forget that the Weimaraner was the center of the universe before the baby arrived. Others include the fur-family members without expecting them to be relegated to the background.

Many times a pup who comes into a family with children will be fueled by the energy of the toddler and younguns running around. Unwanted puppy nipping and also jumping up are typically the issue. It can be challenging. In the same family, if there is a baby, it may well never be a problem. The Weimaraner often are more careful and found to cuddle in with the baby. I used to have a photo of a baby sleeping on the Weimaraner. The family said it calmed the baby. Our relationships are complicated and amazingly unique.