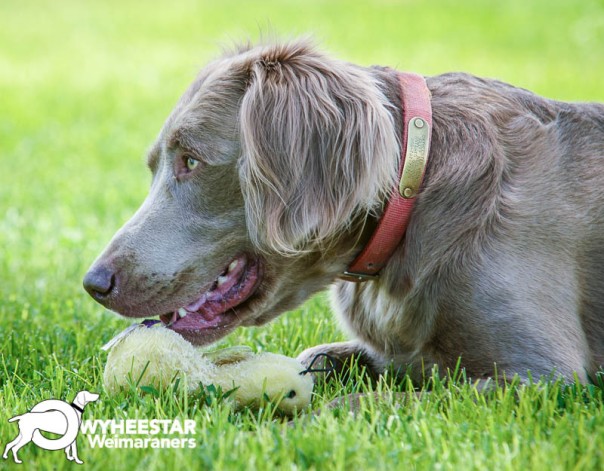 To sum up our previous two discussions in a few words is difficult. We talked about the DNA factor. How it requires both parents to carry the fluffy coat (Longhair) DNA marker to produce Longhair pups. We talked about how difficult it is to see the difference at birth and the DNA testing we do to ensure we have the pups labeled accurately. Finally, we discussed the feathering and showed you a decent photo of what you might expect. What else is there to talk about? Read on to hear what others say about the Longhair Weimaraner–sometimes called the other Weimaraner.

~In Regards to the Longhair

The ideal hair length is between long and shorthair in the range of the original coarse. It should be smooth and thick with a water repellent undercoat, resistant to weather and thorns. At the same time, it should not be too sensitive to dirt and burrs.

The long-haired Weimaraner has been described as conforming to the Standard for the short-haired dog in every respect except for the length of coat. At birth, the coat of the SH Weimaraner is inclined to be rather crisp, with definite stripes which disappear within a short time.That of the LH Weimaraner is soft and wooly at birth, and has no stripes. The coat of the mature dog, no longer wooly, has a silky texture, and is straight or slightly wavy. On the upper part of the body, the coat is tighter than on the SH dog; on the lower part, it is not so tight. The outer sides of the ears are covered with long, soft, silky hair. The tail, which is not docked as is that of the SH Weimaraner, is heavily feathered so that in the field the dog appears to have a graceful plume-like flag.There is soft feathering on the backs of the legs, and between the toes