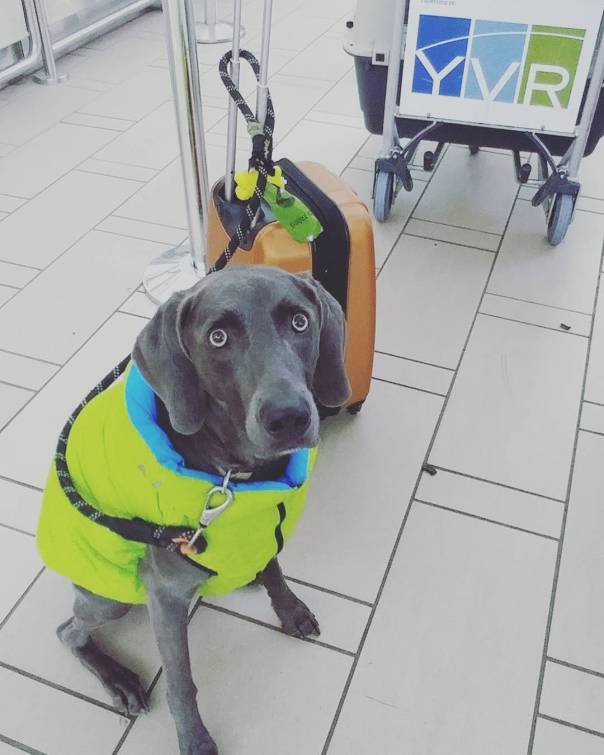 Aaron and I have taken Henry pretty much everywhere with us.  We usually drive and he’s remarkably good in the car, no car sickness. Henry is generally a fairly relaxed Weim, no issues with separation anxiety and has been crate trained since being a puppy.  He even will just hang out in his ‘ house’ for a nap or downtime.

We finally decided to fly with him.  Henry went shopping for his new igloo style–airline approved crate.  Also, got a warm and comfy sheepskin pad for inside, and of course, his stylish and cozy vest to keep him warm. Before the trip we had him try out his new crate to make sure he was just as happy and comfortable in the new one. Yeah! Happy dance!!.. No issues surfaced with the new crate.  Next, we called the vet about medication.  The medication is the one thing we were completely conflicted about.  We consulted EVERYONE!  His vet, Cliff and Shela, my sister the pharmacy tech, and the people whom normally board Henry ( they just got their 4th Weim!).  Thankfully, all were full of information so we could make the best choice for Henry.

This first flight was a short one, only about an hour and a half from putting him through to the plane until we picked him up at oversize baggage.  Two things. We didn’t want, a sick dog from side effects or a dopey dog from too high of a dose.  After many emails, phone calls, and deliberations we decided to test out a smaller dose of the prescription. Since the flight was short, we tried out 1/3 of the pill which was an anti-anxiety medication, Trazodone, one evening and monitored him.  It made him a bit ‘ chilled-out,’ but he wasn’t overly sleepy or dazed, and there were no tummy problems!   Whewwww!  We didn’t kill our dog!

The original prescription was for 1 pill every 8 hours, up to 3 pills per day.  Logically, the medication lasts 8 hours, and this is why we decided to give him a partial dose as the flight was short.  Here we are the day of the flight, after our test, we noted that Henry would probably need a bit more and increased to 2/3 of the pill. Success!

Still fairly normal Henry, sniffing around the airport making friends/ flirting with all the nice Westjet girls but definitely very calm.  ( And we all know that calm and Weim DO NOT usually go in the same sentence.) The airline we flew with ( Westjet) was wonderful. They were quite considerate of Henry. We waited with him until about 1 hour before the flight; we tapped the top of his crate, which he knows is his command to get inside and gave him his favorite treats.  No noises, nothing, just our happy Henry getting first class service as his ‘valet’ wheeled him away personally!  Before the plane departed, one of the flight attendants gave us this slip of paper that confirmed Henry was on board!  (Let out a sigh of relief here!)

Once we arrived, Henry was actually delivered before our luggage!  Again, no noises, a bit of panting from being jostled about, but he was all in one piece!  (Another sign of relief and time for a glass of wine! I think mom should have taken some of those anti-anxiety meds.)  Overall, we were lucky that things went as smoothly as they did.  Our advice, get your pet ready a few days before and make sure they are comfortable.  Give yourself extra time at the airport and ASK! Whether it’s the airline, vet, etc.  Everyone was more than willing to ensure the safety and well-being of Henry.  WHERE did Henry go, you may be wondering? Well to visit grandmaw and grandpaw of course!

We are happy to hear the experience was a positive one. Of course, Henry is not the first OwyheeStar Weimaraner to fly; however, it is great to get the personalized report. We also want to caution that each Weimaraner is a bit different. It is always smart to be careful with medication. Some airlines will not allow you board with a dog who has been given a sedative.

Be sure to get all the facts before planning a trip. Different airlines have different protocols. Preparation is equally important. Of course, having the Weimaraner crate friendly is a huge plus. Henry’s parents went to a lot of trouble to ensure he would be safe and comfortable. Some of the choices were hard to make–you just don’t know how something will work out. Nevertheless, Henry had his first flight, and I am sure everyone enjoyed his visit.