~A Move Worth Making

We now have Taun, a 5-year-old (Topper x Blue) Weimaraner pup. Having him with us floods our life with all the wonderful memories from our beloved Nadja (a former Weimaraner girl whose life was cut way short). Our family returns to life with the Weimaraner at the arrival of Taun. This breed has very distinct personality traits that no other breed we’ve owned or met duplicates. They are not for everyone, but that’s OK.

This joyous happening of Taun joining our family occurred by chance. My wife who is related to Chris was in Oregon visiting her Dad when she met Taun. It turns out, Chris and Freddy are moving, and it was not going to be the best situation for an energetic dog like Taun.

For the joy and the fun of it, Laura took him on a few walks and spent a fair bit of time with him while she was out there. When she was asked if we would be open to bringing Taun home, it didn’t take but a second to decide. We are delighted to have him in our household.

Laura shares (Jon’s significant other) as well as the loving new mom of Taun.

I wanted to introduce myself and say how incredibly wonderful fate sometimes works, i.e., Taking Taun was the bestest decision ever. It feels now as though he’s always been a part of our family.  He settled in nicely–we have added a fair amount of structure from the start, so he knew what to expect from day to day after the big transition.  I love your blog from Taun’s perspective and seems pretty right on.

What I love about Taun:  He’s a family dog, he’s happiest when he can be with any one of us, but he’s ok when no one is home (for short periods of time). He doesn’t appear to have been anxious, seems to nap on any one of his many dog beds. Nevertheless, upon our arrival, he is quick to greet us with his sleepy face. He often sleeps in our daughter’s room, but every so often he sleeps in our room.  He just likes to be near one of us when we’re home.  He may never be an off-leash dog, but when we move to the bigger farm we will work on that, as for now, he walks every morning and evening (round trip 2.2 miles twice daily) to the barn to take care of horses.  He’s an awesome communicator as far as needing to go out and when we’re behind schedule with breakfast/dinner.  He has an abundance of enduring expressions, as Weim’s do!

On the walk to the barn this morning Jon and I discussed the new puppy, and although it’s hard not to jump right in, we want to be settled into the new property and to have more time to devote to the needs of a new brother……Hence, Jon’s and I discussed when/who that happens.  Jon filled in application male or female but I think we’d prefer another male, boys will be boys, and I’m also opting for another Blue.  I had never seen a Blue till I met Taun and I/we do love his coloring, so if that’s

I understand that Tauns parents have been retired, but something akin to those personality traits is what we are looking for.

Taun keeping Jon company while he works at the computer.

Thank you for what you do, bringing wonderful Weim’s into the world and look forward to working with you toward expanding our family.

A Few comments about our Nadja

We had a Weim a few years back that broke our heart. Nadja had the extreme misfortune to develop severe degenerative disc disease at an early age. By the age of 5, she had deteriorated to the point that she was in severe pain and essentially paralyzed in her back end. I made the decision to put her down, and it was one of the bleakest days of my life. I had raised her from a poop-covered pup, and she was a very special dog. She never needed a leash except for her own safety. We could be anywhere, and all I had to say was, “Nadja, come.” and she would race to my left side and sit waiting for me to say, “OK,” before bounding off again. The loss was heartbreaking, but we could not continue on without a Weimaraner or two forever. We will never forget our Nadja.

It has been a while since we received these emailed tidbits about Taun. He continues to settle into his new life and family. He has an ever-expanding role. Here are two more photos of him that speak volumes. 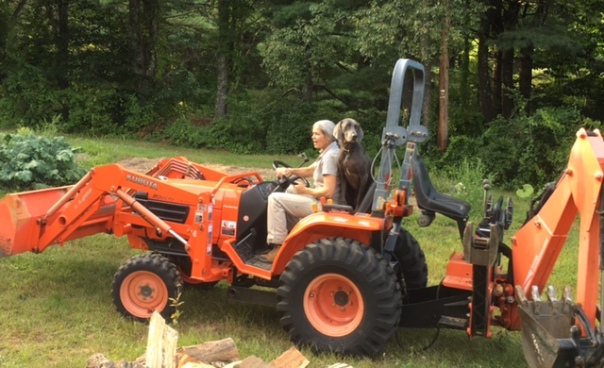 Taun is now ‘The Tractor Operator’

Taun is such a part of our family now and so settled in.
Grace’s study buddy