← A Puppy Comes Home, Then What?
This Week’s OwyheeStar News →

A Cloud of Controversy Midst the Gray Cloud

Opinions, controversy, and bias surround the Weimaraner wearing the blue coat. Their cause has been campaigned by some notables, and discussed in detail by some haters. Despite attempts to thwart their arrival, they can be found other than America. Ten years ago, it was difficult to locate (other than an extremely ill-bred) Blue Weimaraner in America. In 2005, a little less than ten years ago, on more than one occasion we had people wait nine months or longer to get a blue puppy. Frequently, they specified any blue regardless of the sex. A decade later, you can find a plethora of blue pups everywhere from a more than a decent breeder to the cheap Internet marketed ones. Die-hard breed enthusiasts often resist the blue coats for many reasons. Some are valid, and others (in our opinion) are not. There is a move to break the Blue Weimaraner out of the breed, and to rename the breed. That scenario would bring a whole other group of issues, and this is not something we can embrace. For example, unless one of the two blue parents does not carry a marker for the gray coat, some of the pups born in the litter are going to be either gray or silver. Secondly, to narrow the gene pool further by only saving to get the homozygous blue in order to produce entirely blue pups seems like a bad idea. If you are a student of the DNA, or you wish to do additional research click here to read a very accurate (detailed) explanation.

Free-thinking abounds in today’s information age. Not everything we read is true. One thing we can count on though is that people to debate any and every topic. There are experts of every sort no matter the topic of discussion. Some talk to hear themselves talk. Others have a bit of information, they have garnered from experience. There are those that have a passion for a certain topic. Sorting through the fact, fiction, and jumble of opinionated posts can leave a person confused. We cannot clear up the confusion per say. Ours is yet another opinion. In the end, we must all make our decision about what to believe. The vast majority of folks are not interested in genetics. They want a dog that speaks to their heart, and is healthy. They want a certain experience. Nevertheless, to say looks do not play a part would be silly. It is one of the major factors that affects a person’s initial draw to a certain breed. We try to bring a balance to the decision-making by pointing out that while looks are a factor, they are not the most important consideration. Regardless, most people love the Weimaraner’s smooth short clean coat. They love their elegant lines. They enjoy their entertaining antics, and the challenge of raising one. The relationship is one that is difficult to put into words. This breed (coat-color aside) is not the one for everyone.

We embrace and celebrate the Weimaraner. There are many of you who join us in doing likewise. Coat color or coat length are not a deterrent. We love the longhairs as much as the traditional smooth coats. The Blue Weimaraner has an ever-expanding fan base. It has been said they are not proven in the field. To be fair, there were few well-bred and test proven blues seven years ago. Recently, a few have made waves; they earned a prize or award.  A few of these have been listed on our website–click here! It is important for those that raise the Blue Weimaraner to campaign them; this will require participation in a recognized competition, or event.

All our blues are AKC registered. A few hold dual NAVHDA (North American Versatile Hunting Dog Association) registration as well. The blue color coat disqualifies them for the traditional show ring (controlled by the breed club). Therefore, if you see a Blue Weimaraner that holds the show champion designation, it was achieved via another venue. Many folks have gone this route to earn the much-needed recognition. In our opinion, the Blue Weimaraner is a Weimaraner. Regardless of the story regarding their appearance within the breed, after fifty years, they have been intermingled into the gene pool. There are many stories shared between breed enthusiasts, and without extensive documentation, we cannot prove their merit. One such story is that several Silver Gray and Gray show champions have had a blue parent. It is highly unlikely that this would add up to even a handful, but it is certainly possible. Consider this–Willow’s father was an OwyheeStar Blue Stud Dog. He produced this gorgeous, well-adjusted Silver-Gray female. 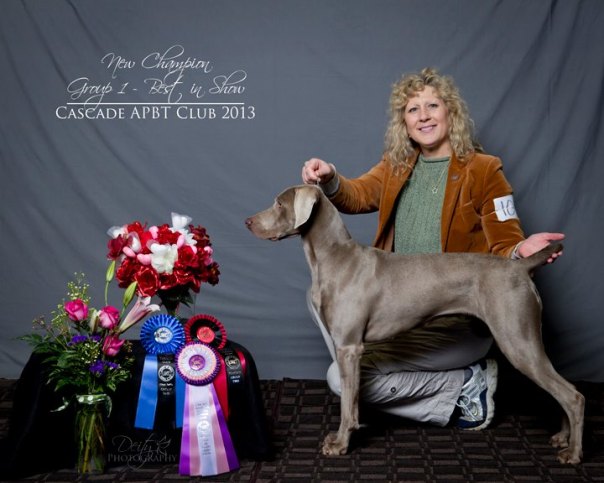 ← A Puppy Comes Home, Then What?
This Week’s OwyheeStar News →